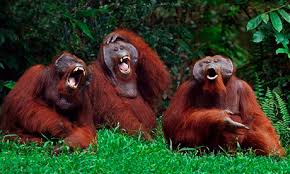 OVER THE LAST five or more years we have seen an endless stream of media stories (if you read those media) on the power of mindfulness and meditation to change conditions in our brain and body and heal illness. Some of the reporting is exaggerated and does not properly represent the nuances of the research, but nevertheless there have been exciting research findings.
There is, however, another mind-body medicine tool that has enormous potential for health and wellbeing: HUMOUR & LAUGHTER. The following are some excerpts from chapter six of Freedom from stress and anxiety, our newly-released book. The chapter is titled ‘Mirth, merriment and wellbeing’ (thank you W. Shakespeare). It is about the value of deliberately cultivating opportunities for humour in relation to recovering from mood problems such as excessive anxiety. It can have a huge impact with other health problems as well, according to some of the research and some well-publicised anecdotes.

“A LITTLE OVER 400 years ago, across several decades the legendary poet William Shakespeare wrote and presented a series of truly great plays. Some of his plays were comedies and most of the others, histories and tragedies, also had marvellous, comic moments in them. In The Taming of the Shrew, Shakespeare has the character Christopher Sly awaken from a drunken stupor to find himself a lord in a manor house, surrounded by servants. In truth he is the victim of a practical joke by the real lord and poor Sly is utterly confused. Then another servant enters to announce that a troupe of players has arrived to present a performance. He tells Sly:

For so your doctors hold it very meet,
Seeing too much sadness hath congeal’d your blood,
And melancholy is the nurse of frenzy:
Therefore they thought it good you hear a play
And frame your mind to mirth and merriment,
Which bars a thousand harms and lengthens life.

Four centuries before our modern day concepts of psychosomatic medicine or holistic health, the great ‘Bard’ was telling the world of the medicinal power of ‘mirth and merriment’ or humour. Bars a thousand harms? Lengthens life? A famed medical man of those times was in agreement with Shakespeare. Dr Thomas Sydenham, considered a pioneering and leading British physician of the seventeenth century, is credited with stating:

The arrival of a good clown exercises more
beneficial influence upon the health of a town
than of twenty asses laden with drugs.

Can laughter, or indulging in liberal amounts of mirth really improve health, relieve illnesses or ‘lengthen life’ as Shakespeare suggested? It is now something of a folk wisdom that it can. Readers Digest has run its joke section, Laughter the best medicine, for many decades. But what of hard medical evidence? I have yet to hear of somebody getting a prescription from their doctor for ‘twenty minutes of belly laughing, three times a day, before meals’; though some medico may have written one.
Humour and laughter have been the subject of research in a number of disciplines from physiology to psychology and sociology. Many small pieces of research evidence hint at the possibility that mirth could do good things for your health. Secretion of feel-good, brain messenger substances like endorphins can be increased by a laughter session. Some of the chemical markers of immune system function are improved. Blood pressure can be lowered and significant muscle relaxation can last some time after hearty laughing. Laughter serves social functions and can improve communication and relationships.
What is missing is scientifically conclusive studies to examine whether systematic, regular laughter sessions can improve or cure particular illness conditions. It may even be too difficult to ever do.
[ — one page omitted here —]

While funding of medical merriment research might be another matter, it is hardly a laughing matter. Knowledge about humour and health could be a matter of life and death for some people. But why wait for such research? Our best source of guidance is still probably anecdotes that inspire us along with our own inner voice.
The wise voices and advice on using humour medically go back to Shakespeare and well beyond, even to writers in the Bible. Over the last fifty years some remarkable anecdotes have appeared of people using humour in effective, therapeutic ways. Best known to students of health care is the case history of Norman Cousins, editor of the New York Evening Post and The Saturday Review.
Mr Cousins underwent remarkable recoveries from several illnesses. The one that his popular book and television movie were based upon was his recovery from ankylosing spondylitis—extremely painful and diagnosed as degenerative and incurable. He took to setting up his own laughter sessions with his favourite comedy films. He started in his hospital room and when that became too chaotic for hospital staff he continued in a nearby hotel, and then at home. His often-quoted lines that best express the effect the laughter had are:

I made the joyous discovery that ten minutes of genuine belly laughter had an anaesthetic effect and would give me at least two hours of pain-free sleep, … When the pain-killing effect of the laughter wore off [Ellen and I] would switch on the motion picture projector again and not infrequently, it would lead to another pain-free interval.
[from ‘Anatomy of an Illness’, by Norman Cousins — both the book and telemovie of the same name]

He made a full recovery from that illness, apparently to the great surprise of doctors involved in his case.
My own experience with laughter being curative was the episode of my frozen shoulders described under ‘Rest’ in chapter two. When I could not sleep at night due to the remorseless pain I would get up to try meditation, comedy videos or both. On many occasions the laughter was both fun and sufficiently pain relieving to allow me to go back to sleep. By getting some sleep my stressed state of mind was greatly relieved for the following day.
There is another memory of my ‘frozen shoulder days’ that Samantha and I laugh about to this day. I could not extend either of my arms far at all in any direction, up, forward or sideways. I could only just drive, with difficulty and pain. Whenever pulling up at an entrance or exit to a parking lot there was no way I could reach my arm out to the ticket machine. I would tell Samantha “push”, and she would push on my left side with all her might till my body was halfway out the window and the hand on the end of my unwilling arm could just reach the ticket slot! Once the pain subsided we would laugh so much I could not drive for some minutes.
Do not wait for a doctor to prescribe laughter for you. Don’t wait till you hear about a large, randomised, double-blind, controlled trial on laughter for anxiety. Have your days become too serious? They usually have when stress or anxiety have taken a hold. If the idea that more humour and laughter might be good for you appeals, start today. You have nothing to lose. Humour has universal value in our lives way beyond whether it might cure aching joints or even an anxious mind.“

[excerpt from  Freedom from stress and anxiety (2016)  ENDS]

The next section of the chapter is headed ‘What’s so funny’. It explores the many, varied ways one can approach getting their daily dose of laughter, especially when “your days have become too serious”.

THE BOOK — it is available for online purchase on this site. Go to the top of the homepage and follow the links.
On the Mid North Coast of NSW it is available over-the-counter at The Professional Centre, 9 Park Avenue, Coffs Harbour. And possibly at a few other outlets by the time you read this.
BOOK LAUNCH — 18th October, 2016 / 5.30 for a 6pm start. At The Professional Centre, 9 Park Ave, Coffs Harbour, NSW
[And most likely a Melbourne launch event in late November]