How popular is meditation & mindfulness becoming?

* WHO practises meditation (among people that are very well known to most of us)?
* WHAT companies offer meditation classes to employees?

By the first question I mean people often in the news; publicly well known people.

I recently had occasion to scan news stories on meditation and mindfulness. There does seem to be an ever-increasing amount of stories, particularly in USA magazines and news websites. Aside from lots of information on the benefits of meditation for the individual, and on medical / scientific research into it, I found a number of stories that highlight well-known people who are reliably reported to have learned and to practice meditation, of one sort or another.

It is not so easy to find lists of Aussies, but plenty of Americans and other international figures. Hugh Jackman is one Aussie though, as is holistic health enthusiast Olivia Newton-John.

Among the others are:
Paul McCartney, Richard Gere, Jerry Seinfeld, Goldie Hawn.
Rupert Murdoch (wow – is that a good advertisement? Not sure about that),
Bill George (board of Goldman Sachs and Harvard Business professor).
Nobel Prize winners: Aung San Suu Kyi, Dalai Lama.
The Dalai Lama is a bit like the Grand-daddy of meditation on this planet, so no surprise there.

In fact, EVERYBODY and their dog seems to be doing it! 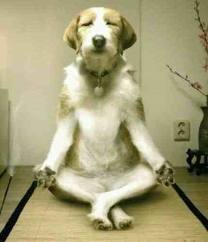 How about some of the companies that offer regular meditation learning programs to employees?

Mainly USA and international also – I don’t yet have much info on Australia-based companies:

Despite having a bit of a ‘flavour of the month’ look to it in Silicon Valley and Hollywood, it seems that many large companies are finding great benefits for employee wellbeing and productivity in encouraging them to learn and DO some kind of meditation / mindfulness practice.

So, it is a very interesting development. Just a pity it is not more widely practised in Iraq, Syria, Ukraine or Russia. Or is it? It would be interesting to know.